Why This World: A Biography of Clarice Lispector. By Benjamin Moser. Oxford University Press; 496 pages; $29.95. Haus; £20. Buy from Amazon.com,Amazon.co.uk

“PREHUMAN divine life is a life of singeing nowness.” Clarice Lispector, who wrote these words, was as enigmatic as they are. Benjamin Moser sets out to crack the enigma. One finishes his new biography largely persuaded by his solution while wishing that he had gone at the task a little less strenuously. 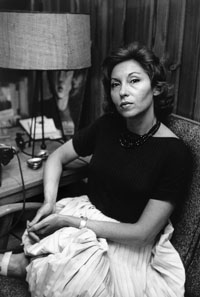 If only we could understand

Lispector, the “princess of the Portuguese language” and perhaps the first Latin American writer to be identified as a practitioner of magic realism, is one of the more obscure geniuses of modern letters. A Brazilian Jew, she fashioned strange, experimental novels and stories in elemental settings that seem only tangentially related either to Brazil or to Judaism. She proclaimed her Brazilianness more often and more forcefully than her Jewishness. But Mr Moser believes that her work is profoundly Jewish. He makes the case that her tragedies and philosophical concerns led her to create a body of work that belongs within the tradition of Jewish mysticism.

Lispector was born in Ukraine to a family still reeling from the pogroms and plagues that followed the first world war and the creation of the Soviet Union. Her feet never touched Ukrainian soil, she insisted—she was a year old when the family fled. Her intellectually ambitious father turned to peddling in Brazil’s poor north-east. Her mother, a secret writer herself, died slowly from syphilis caught from rape in the old country.

Legendarily beautiful, Lispector embarked on a conventional life, marrying a diplomat and mothering two sons. She was not above purveying make-up tips through ladies’ columns in newspapers. But the corseted, wandering life of a diplomat’s wife did not suit her and one son was schizophrenic. She divorced and returned to Rio de Janeiro to live out her days. A fire caused by sleeping pills and cigarettes scarred her beauty.

For Mr Moser, Lispector’s earliest traumas were the most important. Storytelling began as a way of willing her mother’s recovery. The narrative compulsion was coupled to the unsettling intuition that humans have no secure place along the continuum of creation; they slide toward insecthood even as they grope for an absent God. Lispector has been compared to Jean-Paul Sartre, for her sense of life’s senselessness, and to Franz Kafka. “The Passion According to G. H.” (from which the quotation at the start of this review is taken) has the Kafkaish plot of an encounter between a woman and a cockroach.

Mr Moser emphasises Lispector’s debt to Hermann Hesse’s “Steppenwolf”, who is part divine and part diabolical, and to Baruch Spinoza, who saw God as having an amoral, indifferent nature. Above all, he sees Lispector as a latter-day cabbalist for whom utterance itself is the act of creation: for her, God is among those thus created.

Lispector did not choose to say much about herself directly. Mr Moser’s biography relies therefore on inference, context and interpretation. His primary sources for the writer’s early life are an autobiographical novel and memoir by her sister, Elisa. The family lived through a tumultuous period of Brazil’s history, during which Jews sometimes had reason to feel menaced by bigoted despots and fascist rabble. But in his eagerness to emphasise the anxiety that the Lispectors must have felt, Mr Moser underplays Brazil’s tradition of racial and cultural mixing.

At times, Mr Moser’s attempt to understand Lispector as a Jewish writer can feel like recruiting. Lispector was never obvious, as Mr Moser notes. This absorbing and perceptive biography of a fascinating writer sometimes is.